The fusions and confusions of a curious mind

Learning from the heart outwards, by kempspace Under the shady trees rushing by to my left, a red carpet of leaves set fire to the woods. I pulled over to stare hard, it was stunning, but moments of light were eeking away into the dusk and I’ve never pulled my camera and Jack out of the car so fast. He ran around my feet while I tried my best to find the exposure that would work  – frustrated – I don’t want to have to pull this up so much in Post! Trying to keep my brain thoughtful in a fizz of excitement is a feat I’ve rarely managed. Figuring through the magic triangle of ISO, aperture and shutter speed, I found that very small part of my brain that deals with numbers threatening to bolt out the stables. C’mon… work it through…breathe (meditation helps in surprisingly diverse moments). Clicking through the stops I realise this one’s got to go manual to try to get what I see. I rotate the clicks to big scary ‘M’ in the hope I’ll get something before the sun says sayonara.

I still needed some of the magic dust of Post courtesy of Photoshop, but it was much less than before, but a light sprinkling of it. When I look through the frames, I can see I’m getting there.

We walked with Jack along a low lying plain in the New Forest, our steps on the yielding mossy carpet punctuated by virulent gorse. In the distance, an autumnul forest dense with turning leaves, crouched under their weight on the horizon line. Lower to one side of us, a shallow river soothed its way through a boggy tufted mire, meandering as if time were meaningless. England was cast off it’s summer axis, the sun’s brightness was burnished and everything we saw was given a halo of gold.

Eventually we reached the cool embrace of the forest. Sunbeams streamed into the shade to dance with lazy afternoon haze which wrapped the trees; caught up together, their steps set the undergrowth aflame into bursts of colour.

For minutes at a time I stood to take in the scene in front of me. I became as enchanted as the child I had been long ago, a child who had believed in magic.

I had found it again.

Dungeness was made for photographers. When they set down those boat wrecks just where they did, lay down a few of those disused, rusty, skeletal rail lines and festooned decrepit fisherman’s huts with holey fishing nets, clearly it was all for us. I’d seen some great shots and I’m a sucker for a wreck, so off I went with Jack the Russell in tow. Given that he has a pebble fetish, I looked forward to seeing a shingle beach give him some kind of mind boggling rush on a Sunday afternoon.

A stunning day, and people along the line of the coast were happy to point me ‘in the direction of the boat wrecks please’. My orienteering remains legendary.

I couldn’t decide whether to keep the beautiful colours or go mono, as both would have done justice to that dystopia by the sea (so close on hand to a lovely nuclear power station). SO i went for both, manhandling different colour channels in a way of not tried before.

I’m pleased with my experiment, but this was only one way of skinning that cat,I may return to the images for a different edit at some point. I hope you enjoy the shots, they’re here in my kempspace gallery. As for Jack, sheer overwhelm kicked him into narcolepsy on the drive home. I still admire his persistence in trying to find the one pebble I’d throw in a sea of others. There’s a life lesson there somewhere.

The old lighthouse at Dungeness 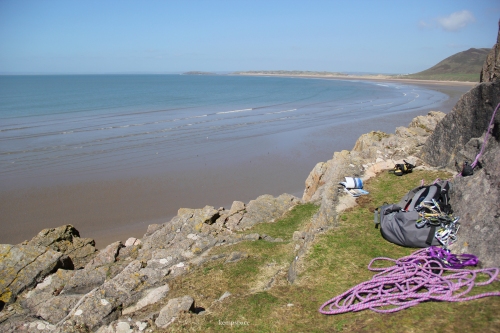 The Gower coastline raises wonder at its beauty, the spectre of skeletal old wrecks, and the eyes of climbers assessing their prowess against the routes that trace the sea cliffs. For those who like climbing with as much of a salty sea breeze through their hair as chalk through their fingers, many routes at Rhossili Bay are launched from one foot on the sand whilst the other aims for purchase on the first hold.

Ramon Marin on One Ton Depot, 7b at Shipwreck Cove, Rhossili Bay.

There are both bolted sport routes and trad lines on these sea cliffs in the Bay, and in between, the Vennerne shipwreck makes for a wonderful subject as the tide drifts out and leaves its bones exposed.

On trips over the last couple of years, I have been increasingly caught up in photographing the beauty of the places we visit to climb, rather than the climbing itself. With my feet planted on the expansive flat mirrored sands at Rhossili, I watched the sea recede to meet the horizon line and gently highlight it with silver. My breathing slowed and I stood lens-captivated, chasing bolts on the sea cliffs far from my mind. 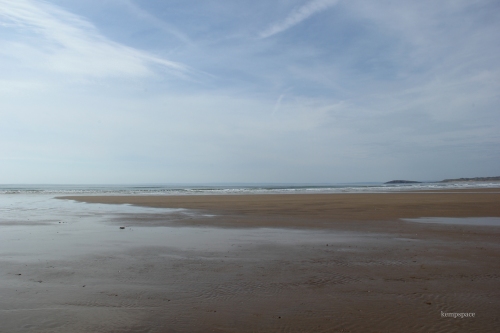 The receding sea at Rhossili Bay

If this wasn’t gift enough, a day spent further inland at Dinas Rock saw climbing routes surrounded by a seemingly magical gloaming, fit as a setting for any fairy tale. Within it’s verdant wooded enclaves, a river and it’s waterfalls ran through the rocks, the babble enhancing the mindful focus of the climbers breathing their way through each vertiginous move. Again, my attention was caught by the unusual mossy-green midday twilight whilst my companions followed the chalk-lit path to top out their routes. I think I know where my route lies. 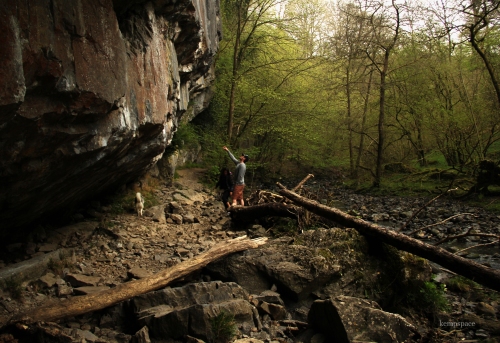 Simon Rawlinson and his gorgeous dog Tufa. Simon, Head Performance Coach at Make the Next Move, points out the climbing routes at Dinas Rock in South Wales.

More of my South Wales photos can be found at: http://www.kempspace.smugmug.com/Places/UK/Wales/i-dgGF7pG

More information about climbing in South Wales can be found at the South Wales Mountaineering Club website: http://www.swmc.org.uk/

A link to Simon Rawlinson’s blog article on the opening of Shipwreck Cove to climbers can be found here: http://www.simonrawlinsonphotography.com/shipwreck-is-open-for-business/

I had the joy of visiting Abella de la Conca in Northern Spain and photographing the community of climbers, walkers, photographers, yogis and nature lovers who visit Nic and Ella’s Eco-refugi and it’s beautiful surroundings. I know them originally through a close knit, warm and friendly climbing community.

Abella Climb is a not-for profit organisation run by Ella and Nic, which aims to establish holistic, sustainable access to outdoor activities in the local area, including rock climbing, mountain biking, walking, canyoning and yoga. They want to raise the profile of the beauty of the local area and are dedicated to preserving its natural and historical patrimony. They will develop a sustainable, permaculture-based approach to local land management including tending their own olive groves and fruit orchards and raising an organic kitchen garden.

Ella and Nic have renovated the Eco-Refugi with their own hands and those of a community of volunteers, to be in keeping with local character and it’s history. They and their two lovely boys live there, at an altitude of 1000m, in the heart of Catalunya’s most spectacular village, Abella de la Conca. Their welcome is warm and their knowledge of the area unparalleled.

The Eco-Refugi is part of the Abella Climb association and staying in it offers a contribution to developing their project aims. I will be going back with my camera and climbing gear for sure.